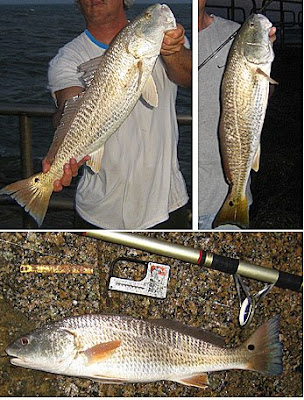 Here's a variation on the famous saying, "A bad day fishing is better than a good day at work:"
"A few minutes fishing is better than none."
Sunday evening I decided I was going fishing. Nothing wrong with that except, the sun was low and it was already 7:30 pm -- and the nearest place had no lights. Wherever you live, maybe you've had the same opportunity to fish late in the day, or for whatever reason you know you'll only have a few minutes. I decided, what the heck, and got to the jetty at Packery Channel on the Texas Coast with the sun already setting. When I got there, people at the very end were catching one of the prized gamefish, redfish. Some were using shrimp, some live minnows, some using cut fish. All were getting fish on their lines, and the skilled ones were able to land them through the rocks. I rushed to get my line in the water, quickly caught one hardhead catfish, cast again, and caught a highly "debatable" redfish. The question was whether it was the minimum size -- 20 inches. I pulled out my trusty tape measure -- make that, my rusty tape measure, and it broke. The section you see is 4 to 5 inches long. You be the judge. Anyway, the fish went back. But I did take pictures of some very nice fish in the few minutes I was there. Worth it!
Posted by Ripp No comments:

Jetties are very good places to find fish. The rocks attract minnows and other creatures the big fish can feed on.
I didn't say jetties are good places TO fish. They're probably the worst possible place to fish -- the rocks catch your hooks, the fish swim into the rocks and break the line after they're hooked, and many jetties, including this one at Packery Channel on the Texas coast, are often very slippery. Today, May 1, it was windy for the 8th straight day. Waves were crashing over the top, and very slippery moss made for very unsure footing.
I fished anyway, with some frozen "finger mullet," small fish, cut in half and placed on a hook -- and cast just as far as possible from the rocks. I caught fish, but these are not the kind you want to eat. One jack crevalle was really fun to catch. It weighed only nine pounds (small as these go) but "jackfish" fight so hard, you'll feel lucky if you can land it. They're not good to eat, and neither are the common saltwater catfish often called "hardhead" (although some, including the Texas Parks and Wildlife website, claim they're pretty good).
Persistence did pay off for a lone pair of fishermen using cut mullet like me, and also live finger mullet. They got two fine redfish (red drum) while I was there. You'll notice they stayed close to the railing even when they had fish, and yes, some fish got away because they were careful not to get into the slippery rocks just to land a fish.
Posted by Ripp 1 comment: