Where Does this Path Go? 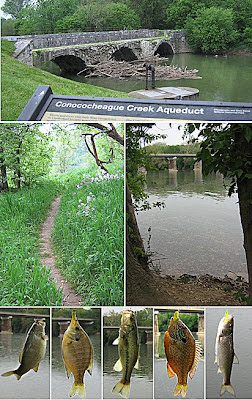 Sometimes a short adventurous hike can lead to a find.

Along the Potomac River in Williamsport, Maryland on May 8, I followed the advice of a local trout fisherman I had seen earlier in the day: go to Williamsport, find the C&O Canal, cross the aqueduct and follow the path to the river. Locals know the best spots, it's all a matter of luck as to whether they're really giving the scoop.

The spot was the mouth of Conococheague Creek. First cast, smallmouth bass, first of about 12 smallmouths. I also caught (l to r) bluegill sunfish, largemouth bass, pumpkinseed sunfish and a sucker, all on the same green soft plastic "grub." None were large, but it was fun. (Note the maple tree seeds, sometimes called helicopters. There were so many they did get in the way. A small lure got caught on the seeds less than a big lure.) 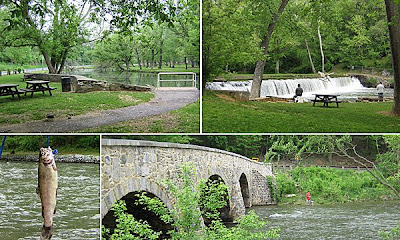 Here is one perfect place for a first try at a trout: Devil's Backbone Park, in Washington County, Maryland. It's a classic park next to the side of the road with trees, numerous picnic tables -- and a stocked trout stream open to the public. It's about two hundred yards of rushing trout water from the dam to the other end of the park where there's a scenic stone bridge (and below the bridge, as you see above, much more trout fishing with parking along Maryland Route 68 at various spots). This is Antietam Creek (yes, just a few miles upstream from the famous battlefield), and Beaver Creek is another very accessible trout stream in the neighborhood.
This is out of the way, as are many fishing places. Lappans Road doesn't really go from anywhere big to anywhere — so not many outsiders know about this park. Still, on a Thursday afternoon in May a half dozen people were fishing for trout here, so the weekends could get busy.
Don't be put off by the appearance of people fishing at lakes and rivers. Like most people getting out to go fishing, they wore jeans and t-shirts. The people here were all more than friendly, asking if I caught anything and sharing their trout fishing methods. The person who caught the rainbow above said he used a Berkley Powerbait, corn flavor. As always, these trout can be caught on a size six hook baited with a single kernel of canned corn.
The park is about five miles south of Hagerstown, Maryland on Lappans Road (Md. State Highway 68) between the two very small towns of Lappans and Millpoint.
Posted by Ripp 1 comment: 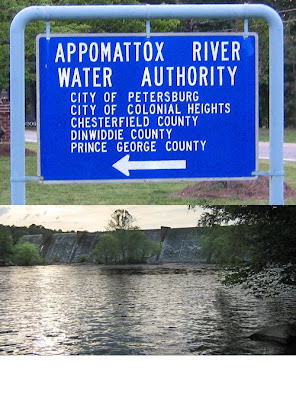 If you look around, sometimes you'll be surprised at the places you find, nice and open to the public. This is along Highway 36 (River Road) south of Richmond on the Chesterfield County line.

Does the sign mention a park? No, not at all. And driving past manicured drinking water ponds surrounded by barbed wire fences, you definitely get the feeling, "I don't think I'm supposed to be in here!" No hint of the park at the very end of the road. The first Sunday of May, 2008, sunny and warm — and there were three cars in the parking lot, including mine. I fished for a while and caught three sunfish.

Posted by Ripp No comments: 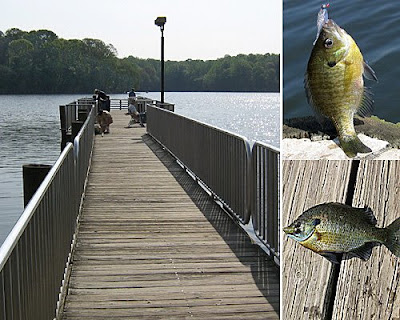 It's May, and after a colder than average spring, the fish are finally out and about at Burke Lake (and probably all the other lakes in the mid-Atlantic). Today I caught these sunfish around 9 am on soft plastic lures on little lead-head jigs (1/16 of an ounce).
When I got to the pier, I noticed all the people were out in the deeper water, but I saw fish in the shallow water, two or three feet deep. It's clear enough to see to the bottom there. I caught one and got lots of bites just bouncing my lure straight down below the rod.
None of these other people caught any fish at all. I took a look, and they were using worms below a float, which is very good. But they were in 10 to 15 feet of water, with their bait only one foot below the surface, which is bad.
I suggested to one daddy on the pier to take his sad little boy to the shallow water. It worked. They were getting bites when I left, and if nothing else they had the excitement of watching fish come up and grab their bait. (They also could have probably caught fish in the deeper water if they dropped their bait down ten feet or so, but that's a lesson for another day.)
By the way, the fish that were so visible at 9 am in the clear shallow water were mostly gone by ten am, presumably to deeper water to escape the bright sunlight, so this is one place where it might be true that getting up a little earlier can make a difference.
Posted by Ripp No comments: