Hurricane Ike is due here in less than two days. Today, Wednesday September 10, I went to the surf in Corpus Christi, Texas.
What a tremendous fishing day, for the few of us who went.
At daybreak I went to Packery Channel, the jetty-protected opening between the Gulf of Mexico and the upper Laguna Madre. I have never seen so many skipjacks (ladyfish) as I did at dawn. These tailwalking relatives of tarpon were so numerous I simply couldn't get my lures past them for the first hour of the day. When I went to the end of the jetty, the skipjacks I caught were much bigger. One that was at least two-feet long broke my line. Two are pictured.
However — the fishing was tremendous for those four people on the jetty, including me. I used a live mullet to catch a 27-inch redfish. The person next to me had the odd fortune of catching a redfish just a fraction over 28 inches. In Texas, you can keep three redfish a day between 20 and 28 inches, but if you keep a redfish OVER 28 inches, you have to take a tag off your saltwater license and attach it to the fish. You get just one tag with your license.
Another fish pictured is the snook, even more regulated in Texas. Only one allowed per day, and only if it's between 24 and 28 inches. This one went back. Other fish caught at Packery channel in the short time I was there: mangrove snapper, blacktip shark and flounder.
At 11 am I went to nearby Bob Hall Pier. The water was clear, the fish were biting better than I have seen all year. And there were only five people fishing, all together in the shallow water. In three hours they had caught a huge stringer of trout and spanish mackerel using live mullet, and like me earlier, they were constantly battling the super-aggressive skipjacks, so numerous they were a nuisance. Sad to say, the county parks department had to close the pier at noon to prepare for Ike.
We can just hope it'll still be there after this weekend.
Posted by Ripp No comments:

Labels: Fishing before a hurricane 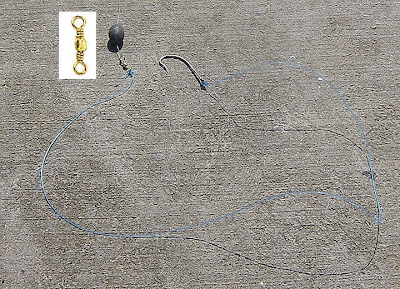 There are as many different rigs to attach to your line as there are fish in the sea. Here's the one I use the most, and it's very common in fresh and saltwater.
There are three parts: the weight, the swivel, and the hook. The hook is at the end of what's called a "leader." It's stronger line than you have on your reel. Here, the line from the reel is 20-pound line, and the blue leader is 25-pound line.
The round weight just slides up and down the line and it's known as a barrel sinker, or an egg sinker. With this set-up, the brass swivel prevents the weight from sliding down to the hook, and when the fish bites, it can't feel the weight, as it would if it was the type of sinker that's tied on to the line.
Especially in saltwater, you may want to substitute a steel leader for the blue fishing line leader, because so many saltwater fish have sharp teeth that cut even heavy line.
You'll see many, many kinds of rigs, some with two hooks. Use whatever you like, or — whatever you see that's working where you are.
Posted by Ripp No comments: